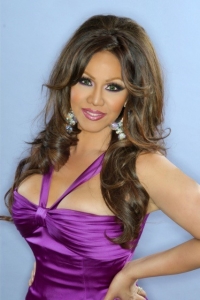 Las Vegas, Nevada, March 5, 2013 — Born under the sign of fire, Selena feels passion is everything. A native to Hawaii, Selena considered herself a coconut girl in a high fashion world. A makeup artist and hairstylist by trade, she has traveled across the globe, adding her magic touch to many celebrities, royalty, fashion shows, and television as well as in the pageant world. A hard worker and a strong believer that you never rest, her work ethics have inspired many to be just like her.

As a transgendered woman; Selena started her journey in life, back in the early 70’s. In the 80’s she played dress up and watched television hoping to someday becoming a pop princess. In the early 90’s Selena was introduced to the adult club scene and that’s where the magic started. For Selena fashion and music was everything, it became part of her life, and Selena was born.

Performing for local shows in the clubs, Selena found herself and evolved into an amazing performer. However by the late 90’s Selena felt burned out and exhausted. Clearly a change was needed. She felt that a refreshing start needed to happen. Selena needed to step out of her comfort zone.

The big move took place in 2001. Selena packed and left Hawaii and moved to Las Vegas, Nevada to pursue a career and live her life. In 2003 Selena was once again introduced back into the drag pageant world, creatively assisting many national titleholders in their reigns. Selena found her niche and was living her life.

Selena’s former titles include but are not limited to Miss Gay Las Vegas, Miss Galaxy International as well as many other pageant titles. Selena say’s “I’m not stranger to the pageant world, I have no problem doing a 50 yard dash with high heels and glitter.”

Selena is the Show director of the Polynesian Dollies Revue at Charlie’s Las Vegas. ”Love”, “Live”, and “Inspire” are the three words she lives by. As Miss Las Vegas PRIDE 2013 Selena plans to reach out and share the 3 things that gives her inspiration; LOVE each other unconditionally, LIVE life to the fullest with no regrets and giving back 100% INSPIRES others.

Ernie Yuen President of Las Vegas PRIDE and Royalty Coordinator say’s “We are happy to have Selena join the Las Vegas PRIDE Family. I am sure Selena will be an important part to help build a stronger LGBT Community through assisting with non-profit fundraising efforts and representing Las Vegas at out-of-state events” The Southern Nevada Association of PRIDE is excited for 2013 as we celebrate our 30th Anniversary. Please join us in congratulating Selena- our Miss Las Vegas PRIDE 2013.

Selena would like to dedicate her reign to “my friend, my angel Tracey ‘Kalani’ Savage.”