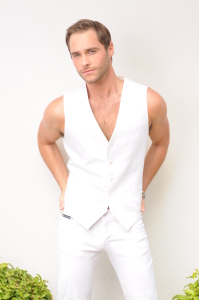 Josh is a man of many hats- entertainer, singer, actor, philanthropist, and now, PRIDE Celebrity Grand Marshall. He currently stars as the lead male role in the Las Vegas favorite, PEEPSHOW at Planet Hollywood Casino & Resort. Josh is also one of the stars in E! Channel’s hit reality show, “Holly’s World,” alongside BFF Holly Madison. He has also taken the music world by storm with the release of his first solo single, “Report to the Floor.” The single zoomed to the top ten of the iTunes dance chart. His most recent single, “Last Dance,” has too burned up the dance charts. Both songs showcase Josh’s amazing vocals and have really allowed him to express himself as an artist.

Josh is also an active member in the community. He is always looking for ways to lend a hand, whether it’s participating in a walk or offering his vocal skills for an event. He hopes to inspire others to get involved, and to not be afraid to be “out” in the community.

“We are very excited to have Josh as our Parade Grand Marshal for 2011,” said Las Vegas Pride President Ernie Yuen. “Josh loves Las Vegas and his LGBT community, he is all about giving back and doing what he does best–being fabulous. I am positive Josh will do an amazing job, we are all looking forward to working with Josh. Pride 2011 will be the best yet!”