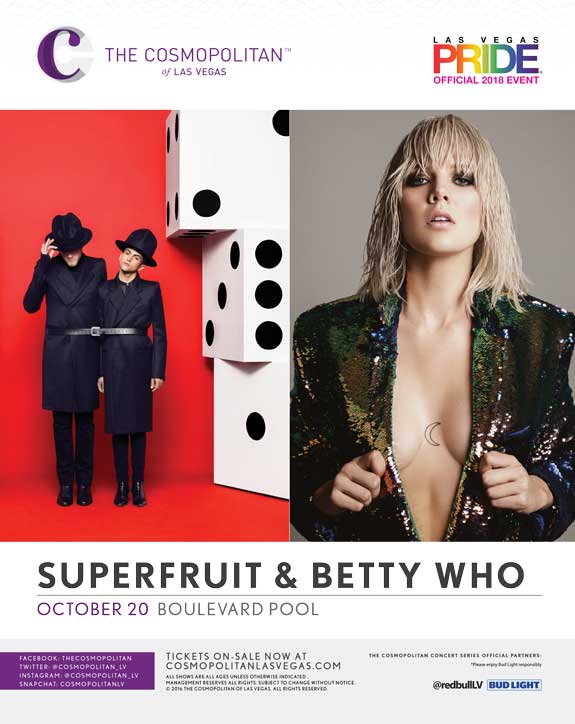 CANCELLED: Due to potential inclement weather, Superfruit & Betty Who with GoldBoot on October 20 has been canceled by the Cosmopolitan. Refunds will be available at the point of purchase.

SUPERFRUIT
Since debuting in August 2013, SUPERFRUIT has amassed nearly 375 million views of its music and comedy videos. The duo’s musical content has ranged from artist medleys to one-take musical performances, such as Frozen and La La Land. Superfruit’s Beyoncé Medley was hailed as “flawless” by the Huffington Post and endorsed by Beyoncé herself. Buzzfeed declared that “Superfruit has turned your hip-hop faves into Broadway Masterpieces” with its “Hip Hop Goes Broadway” videos, the first garnering more than 9 million views. In 2016, Superfruit released an animated video for the original song “Bad 4 Us,” which Perez Hilton praised as “a disco soul jam.” In 2017, the duo’s full-length studio album, Future Friends, debuted at No. 9 on Billboard’s Album Chart alongside a high-energy performance of “Hurry Up” on The Late Late Show with James Corden. Superfruit’s 14 Future Friends music videos (one for each album track) have amassed nearly 20 million views.

BETTY WHO
Casting a striking presence as a performer, emanating confidence as a writer, and inspiring as an independent force, Australia-born and Los Angeles-based pop star BETTY WHO has quietly elevated herself to a worldwide phenomenon on her own terms. Acclaimed by Entertainment Weekly, Vogue, Rolling Stone, Buzzfeed, Elle Magazine, and more, Betty’s sophomore album, The Valley, yielded a string of international hits, including “I Love You Always Forever” (certified double-platinum in Australia) and “Human Touch.”

Beyond countless sold out headline tours, she’s delivered knockout television appearances on The Today Show, Late Night With Seth Meyers, The View, and many more aside. Betty’s commitment to charity, health, and wellness matches her passion for music. She has given performances to benefit UNICEF, ACLU, Planned Parenthood, The Trevor Project, Human Rights Campaign, and many more. She joined forces with Lululemon and Soul Cycle to launch the acoustic “Beats Per Moment” tour, ran a Nike marathon on the entertainment team, and partnered with a personal favorite workout app, Aaptiv, for playlisting.

GOLDBOOT
Everything about GoldBoot is Las Vegas magic, mixed with pragmatic reality. GoldBoot’s music is all the glamour and lights of the Vegas Strip, juxtaposed with heartfelt songwriting and real stories. The disco pop duo presents an explosive energy and unforgettable sound that can be loved by fans of Michael Jackson, The Killers, Jamiroquai, Prince, Passion Pit, Muse, The Eurythmics and beyond. Logan Lanning and Bobby Lucy have been creating a buzz for themselves performing pop ballads with disco beats and addictive synthesizers, getting feet moving all over the Western United States.