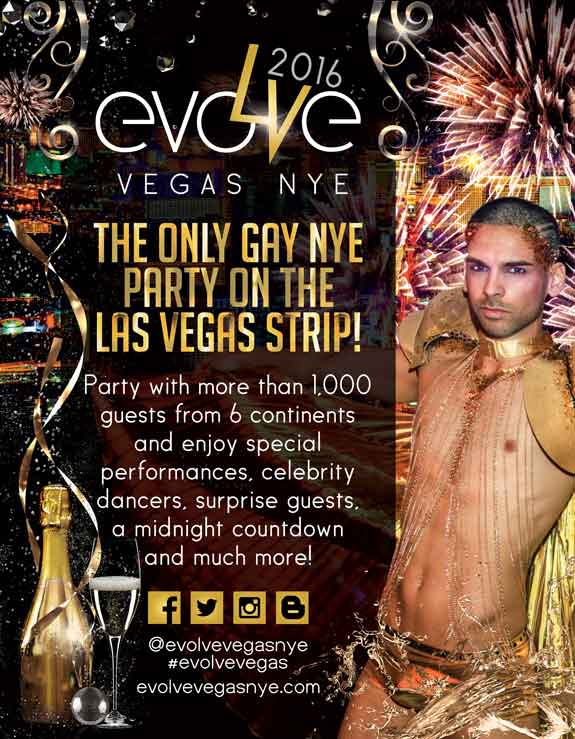 After throwing its first wildly successful sold-out New Year’s Eve party last year, Evolve Vegas NYE, the only gay New Year’s Eve celebration held on the famous Las Vegas Strip will return to The Havana Room inside The NEW Tropicana Hotel where gay revelers from around the world will ring in 2016 in an exciting and elegant venue.

Last year’s Evolve Vegas NYE, hosting nearly 1,100 guests, was voted among the top 6 Gay New Year’s Eve blowouts by OutTraveler magazine, and attendees came from 6 continents.  One guest said, “I enjoyed the fun atmosphere. The entertainment lineup was awesome. Everyone who attended was super nice. For showing up to the event by myself, I had the best New Year’s in Las Vegas, and Evolve was the primary influence.”

Similar to last year’s festivities, Evolve Vegas NYE will usher in the upcoming year with a diverse array of notable performers, celebrity guests, musicians and the event will once again be emceed by the fabulous Edie from Cirque du Soleil’s Zumanity.  Guests will relish in The Havana Nightclub’s breathtaking indoor/outdoor layout and when the clock strikes midnight, they will be treated to wonderful views of the Strip’s stunning firework display. The roster of entertainers and special guests is forthcoming, but one thing is certain:  It’s the perfect gay New Year’s Eve extravaganza to attend with a group of friends, but if you’re flying solo it’s a great opportunity to meet new people.

Tickets for Evolve Vegas NYE are $99 for General Admission and $149 for VIP Admission. The VIP tickets include a 2-hour private reception featuring open bar, special VIP performances, meet and greets with the performers and celebrity guests, plus VIP seating and bar access.

Tickets are available for purchase now at www.EvolveVegasNYE.com.   For more information contact Donovan Kaneshiro at Donovan@evolvevegasnye.com.